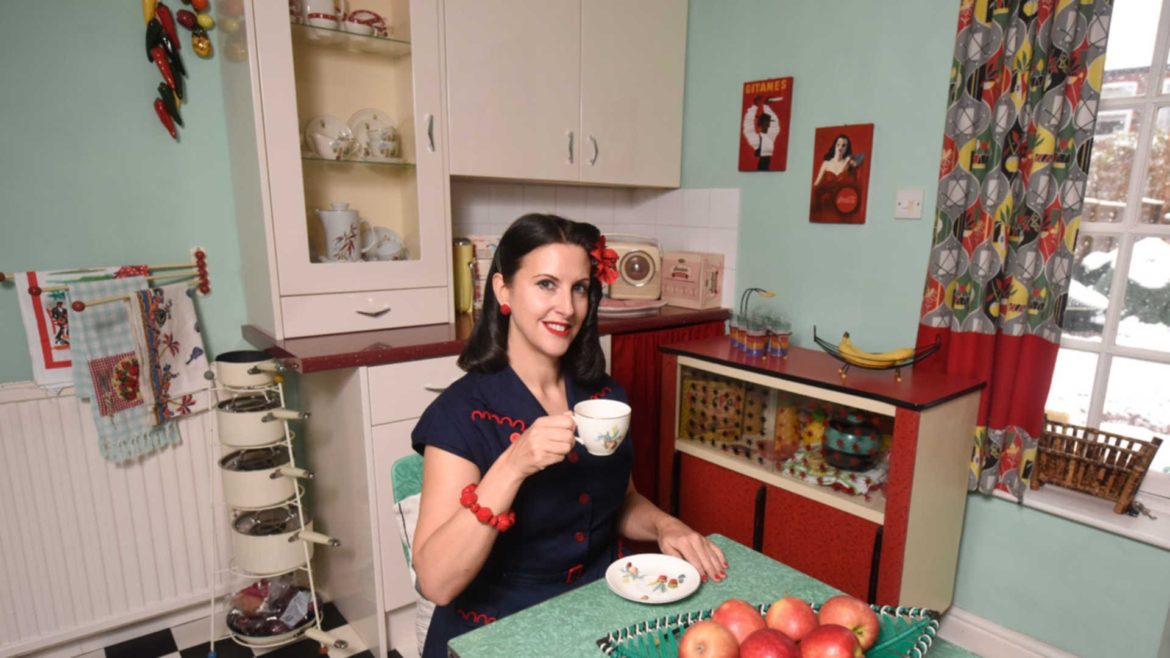 The stereotype of a 1950s housewife exists for a reason. Everyone is familiar with the image of a perfect stay-at-home wife, ready for her husband while the house is clean, the children tended to, the meal is ready, and on top of all, she looks spotless in a nice dress and a pair of heels, tidy hair, and make-up. However, what did their day really look like, and how different was it than today? They could not have been happy with their position and treatment. Let us look at a typical day in the life of a 1950s housewife.

The alarm rings and the woman does not get up immediately. Her husband brings her a cup of lemon tea in the morning. He heads to get a shower while she wakes up the kids, Debbie and Timmy. She goes downstairs and makes pancakes for the family. She packs lunch for the kids, while her husband rejects the breakfast, demanding a full cooked meal of sausages, bacon and eggs, ground coffee and a freshly squeezed orange juice. When he and the kids leave, her day starts.

The phone rings and her friend asks her to play tennis at the club, and then have lunch with the girls, followed by shopping. She hesitates but agrees. During her shower, she sees that the tap is dripping and decides to call a plumber with whom she harmlessly flirts. She takes a while to get dressed and has trouble deciding among the many chiffon, silk, gingham cotton and flowery taffeta dresses.

Tennis went by great, as she won. She liked the Scandinavian tennis coach and decides to ask her husband for tennis lesson money. He dresses up nicely, puts on make-up, and goes to eat with her friend. Men tip their hats to them, which makes them feel great. The two meet two more lady friends, and the meal alongside gossiping and racist, s*xist and homophobic remarks starts.

After lunch, she goes with her friend for some shopping. They buy expensive gloves, a pink girdle, a yellow polo shirt for her husband, yoyo’s for the kids, and a roll of harlequin print material to make cushion covers. She stops by for a sundae and to buy a book.

She drives home in a green Buick Roadmaster station wagon, complete with a wooden panel trim. She listens to the radio and thinks about the night she will have. She can wear her new stylish pants, pop her hair in a part ponytail and have a barbeque on the patio with the family. She then remembers her husband hates those pants because skirts and dresses are for women, not pants.

She realizes she had forgotten to pick her daughter up at the ballet lesson, is 15 minutes late, which then means she will not have time to put out Timmy’s milk and cookies. She feels a lot of guilt.

She gets home, which is a mess, and the dinner for her husband is not even in the oven! She will not even have time to hide her shopping and make her husband his pre-dinner drink. He would kill her if he found out how much she had spent. Her daughter bugs her about her ballet costume, due tomorrow.

The panicking housewife shoves the shopping bags under the bed, powders her nose, squirts some spray on her hair and touches up her lips, all just in time to hear her husband’s car in the driveway. She storms downstairs and quickly makes the cocktail. Even though the front window, she realizes her husband has had a terrible day, due to his posture and angry facial expressions.

“Hi Honey! Had a bad day?” She says sweetly while giving him the drink. He grunts something under his breath and loosens the tie. They kiss because it is customary, and asks when is the babysitter coming.

“Wilikers… sweetpea, please don’t tell me you forgot about Redkin’s retirement dinner tonight? It’s very important. Old man Smythe will be there. You really have not called the babysitter?” He frowns majorly while looking at her as if she were a child. She is expecting a finger pointed at her, like when you discipline a child.

“Of course I have my love!” she says, and storms upstairs to find a last-minute sitter, while he is distracted with the kids. She quickly gets dressed and races back again, as she has to feed Timmy and Debbie first. Some milk and sandwiches appear and the kids storm to the kitchen table.

She decided to wear a black silk Dior dress, with a cutaway V-line back. While going through the Chinese-themed jewelry, she opts for a marcasite brooch for the dress. She sprays Chanel No 5 and now looks like a million dollars. She is more than proud of herself.

The retirement dinner is excruciating, as she spent the evening divided between polite chit-chat with uptight matrons, and fending off smoke and nicotine stained hands of her husband’s boss. She barely talks to her husband, who is flirting with secretaries in provocative floral dresses. He does, however, shoot frowns at her.

Throughout the evening I barely exchange two words with X, who is busy flirting with a bevy of nubile secretaries in bulbous floral dresses, though every now and then he shoots me a heavy frown whenever I look like I might be anything less than enthralled with Smythe’s company. An attractive waitress who weaves though, offering appetizers. All the men look after her and whistle, amazed and drooling.

The miserable evening ends and the pair leaves for home. Her husband’s breath stinks of whiskey and she politely and lovingly suggests that she should drive. He looks at her as she were crazy, and they drive home in silence.

She thinks about those tennis lessons, and since she has been good all day, she is ready to ask him.

“Why do you want tennis lessons? Didn’t I want a washing machine? Isn’t that more important?” He does have a point here. He then asks what she thinks of his “ability to provide”, and besides, a job would be “the ruination of you”. TO her asking him to make logic out of this, he shouts with authority “and that’s the end of the matter!”

“Now turn out the light. it’s time for bed.” She wants to ask why she has to go to bed exactly when he does, but he already went upstairs climbing and is mumbling something about him being “the man of the house” and that he “wears the pants”. Imagine if he finds the shopping bags in that state.

While he is brushing his teeth, she picks his shirt from the floor and sees an apricot colored smudge. Is that lipstick on his collar? His voice interrupts the storming of emotions:

“And what’s the matter with the shower tap? It won’t stop dripping… you’re supposed to take care of these things! What do you do in this house all day anyway, while I provide for this family?”