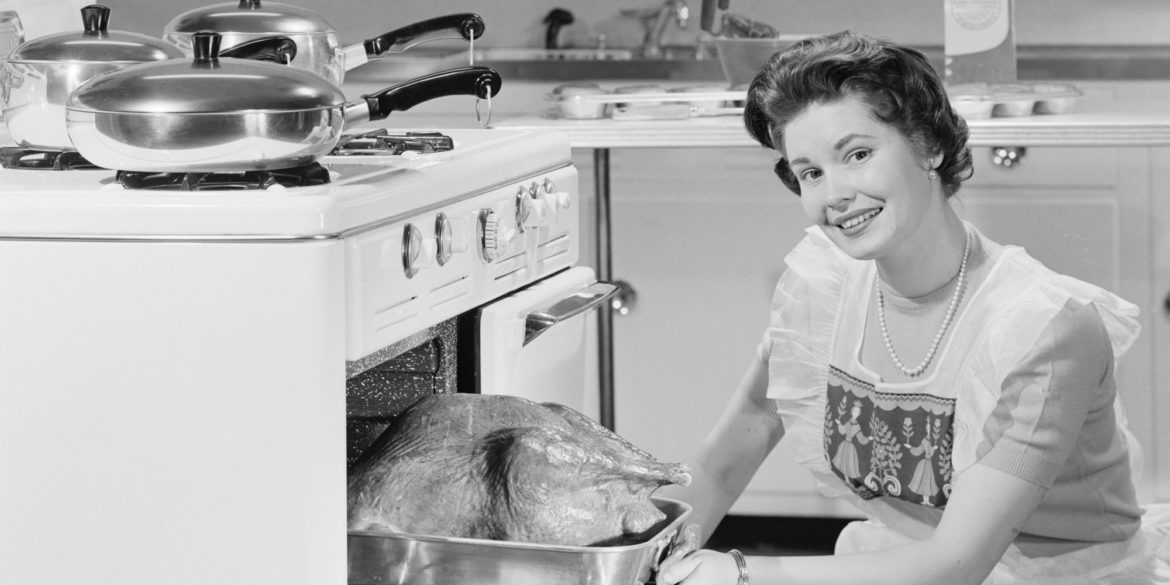 During the 1950s, life was pretty hard for the housewives. Each they, their life was dreary and complicated. Women were forced to leave the factories and went back home to care for it, and the family.

In the ‘40s, nutritious meals had to be made for the war efforts, and they had to keep their children alive, but the next decade brought something more. The meals had to be nutritious, attractive and exciting, the houses had to be spotless, while the women themselves had to be attractive for the whole day. Keeping the kids alive was not nearly enough then, as the women had to look after their emotional well-being as well. All of these tenuous tasks were propagated domestic manuals, magazines for women, and the burgeoning advertising industry. What is more, friends, neighbors and husbands all imposed and stressed this as well.

The whole world told women what had to be done and advised them how to behave. Read on to learn about some examples of this.

Distract your toddler with a nesting ashtray

Even in the early 1950s, the baby boom was already underway, as little children were everywhere, getting into trouble and mischief all the time. However, CBC’s domestic expert had the perfect solution and advised to keep the toddler from wandering into a fireplace by distracting them with a nesting ashtray. If it had worked for her, it must work for you too.

Pizza is an exotic new food (and comes on a biscuit)

Today, pizza is nothing new or special. It is simply a pleasure and comfort food. However, in the 1950s, it was a part of the highest exotic cuisine. In one of the screen tests for the Vancouver Homemakers Club, Mrs. Brady introduced this amazing new food coming from Italy. They would describe it as a “biscuit,” with tangy tomato sauce with oregano on top, and “nippy” cheese everywhere on it.

If your child is having problems, it is entirely your fault

The theories of Sigmund Freud and his daughter Anna experienced a new level of importance in this decade. One of the most important ideas is that a young mind is an entirely blank slate. The first five years of a child’s life determine who they will become. Children are not born bad, so if they are bad, it is because a woman failed as a mother. What is more, if the child is not developing properly, or does not smile, even if makes all sorts of trouble and does the crime, that is all your fault.

Also, do not discipline your children

Because of the same Freudian theories, a radical and sudden change in disciplining children arrived. Almost overnight, parenting changed from the philosophy of “spare the rod, spoil the child”, to a permissive model. Here, the main idea stated that harsh discipline emotionally scars children, and permanently. Rigorous toilet training, harsh scolding, and too many regulations permanently damage the child’s psyche. Dr. Benjamin Spock wrote in his book “Baby and Child Care” from 1946, reads:

“Respect children because they’re human beings and they deserve respect, and they’ll grow up to be better people.”

While the old parenting style was dictatorial, this new approach was democratic. Children had the status of junior partners in a household, were consulted. Parents had to stop everything and attend to the needs of their kids.

There were rules to dressing, even when you are sleeping

In “The Art of Being a Well-Dressed Wife” from 1959, and then reissued in 2011, Saks Fifth Avenue Designer presents the guiding principle for women:

“Remember it’s your husband for whom you’re dressing. Think pretty when making your nightwear selections, and please, no safety pins or missing buttons. Fastidiousness is essential when it comes to sleepwear. For morning you need a warm, ­tailored dressing gown, slim in cut and ankle-length. This length is best because short dressing gowns can expose the unattractive sight of a rumpled nightie or pyjama ­bottoms — or bare white legs — ­protruding underneath.”

Make it all look effortless

On top of all the responsibilities, cooking, cleaning, looking after children, and looking good all the time, women had to make it look like it was nothing.

To help them keep up this illusion of everything coming to them naturally, many women turned to barbiturates, which is a class of drugs associated with World War II soldiers. Amazingly, they were then prescribed as “mother’s little helpers.” Cosmopolitan and Ladies Home Journal even told women that sedative drugs including Milltown and Valium are the cure this unhappiness and hardship that ailed them.