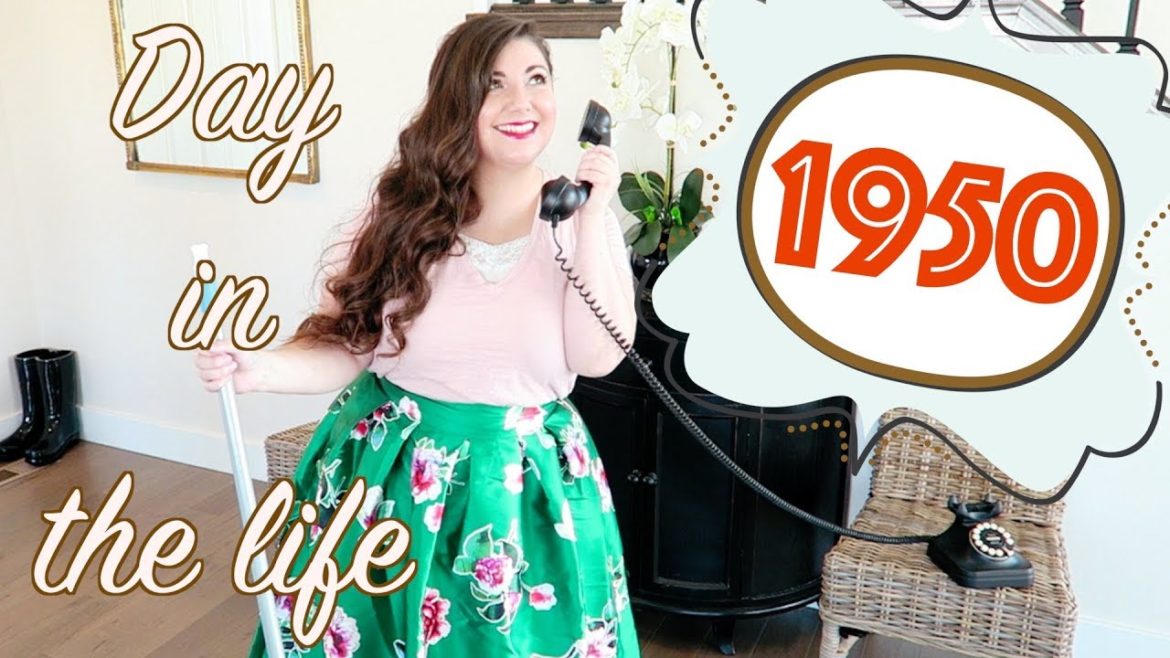 Perhaps the most famous stereotype from the 1950s is the image of a perfect housewife, who keeps a spotless home, has her husband’s dinner ready when he walks through the door after work, and single-handedly raises children. All of it while looking fashionable and beautiful, of course.

Media advertising role models like Barbara Cartland, which further encouraged and enforced these standards on women. Their place was in the home.

From her own experience, as well as those of other women, grandmother and historian Sheila Hardy from Suffolk revealed the daily life and reality in her book, called “1950s Housewife Marriage And Homemaking In The 1950s”.

In the book, there is a list of everyday chores women had to do. It is safe to say that a modern woman would faint after reading this. A number of pages are devoted to only the rules regarding how to properly make the bed. “It was a slatternly housewife indeed who left her bed unmade throughout the day,” she writes.

Completing the daily chores, breakfast, lunch, and dinner had to be cooked, laundry and ironing had to be done, while trips to the shops also had to be made. To make matter worse, they did not have big supermarkets. Instead, they had to go to “their own parade of local shops, which would have included a post office, butcher, greengrocer, grocer, newsagent, baker, and dairy. In many places, there would also have been a fishmonger, possibly a fried fish shop, and invariably a draper who also sold knitting wool, and a chemist.”

“Books, magazines, films and, later, television programs tried hard to reinforce the idyllic picture of the perfect stay-at-home housewife who took care of the home, raised the children, cooked nutritious meals, and provided a haven of calm for her hardworking husband when he returned at the end of his working day.”

Women were also told to look the part they were playing when their husband came home.  They had to be “bathed, perfumed and dressed in smart clean clothes, complete with fresh frilly apron, ready to spend a cozy and possibly romantic evening with him.”

However, in reality, of course, it was impossible to meet these ideals.

“They would have their husband’s evening meal ready but it was doubtful if they would have had time to run a comb through their hair, let alone wash their face and apply make-up.”

The writer adds, “The women who might take Miss Cartland’s advice or heed that given in magazines were those who most probably had some help in the house. If all your washing went to the laundry from whence everything, including your husband’s shirts, returned beautifully ironed, and if you had an obliging Mrs. Mopp who came, perhaps not every day but certainly more than once a week, to scrub, clean and polish, then like Mrs Dale whose diary was broadcast daily, you too could strive to be the perfect housewife.”

Although the idea was that women had to be the perfect homemakers, many did it while having their own jobs. Working women who perform these tasks today with like vacuum cleaners and dishwashers have a relatively easy job in comparison.  “Modern women complain of pressure, but many 1950s women worked and still came home to do the domestic chores.”

However, while both s*xism and inequality ruled, not all housewives were ‘downtrodden doormats’, but ‘tough and ultra-organized’. Men did earn all the money, but women would be in charge of how it was spent while balancing household finances with the utmost precision.

“The vast majority of stay-at-home wives were given a sum from their husband’s weekly pay packet and were expected to run the house, and feed and clothe themselves and later the children, out of it. In some households, the man handed over his unopened pay packet to his wife who then gave him back what amounted to his pocket money. Others allotted varying amounts into tins or jars to cover the rent, bills for the utilities, insurance policies or to pay regular installments on essential items, such as the gas cooker. Another receptacle was earmarked for storing the shilling pieces needed to feed the gas and electricity meters.”

Women made lists of household items and kept receipts to keep the books balanced. She has them in her book, which offers a unique look into the lives of these families 70 or so years ago.

Regarding fashion, Vogue and others represented the Queen and her sister, Princess Margaret, as style icons, together with Doris Day and Grace Kelly. Women made the most of then-modern fabrics like nylon, while outfits were not complete a hat and gloves.

“For summer the hat would have been close fitting: a Juliet-style cap, or a simple stiffened band some 5in or 6in wide in a material that matched or toned with the dress. Gloves were considered much more than simply items to keep your hands warm in winter. The 1950s women had been brought up by mothers who considered that ‘no lady left the house without her gloves on – not put on as she walked down the street – but put on in the hall before she checked in the hall mirror that she was fit to face the world!”

As they couldn’t afford to buy new dresses very often, 50s women were encouraged to make do and mend and creating dresses from patterns was the norm.