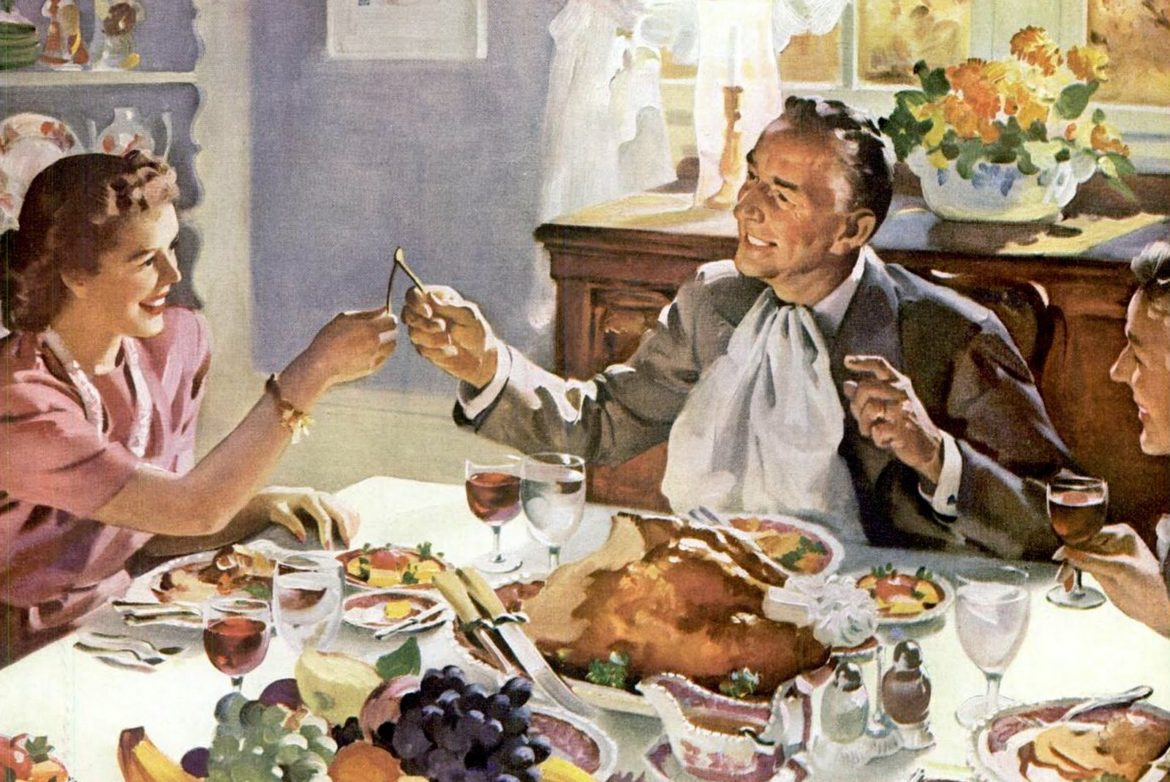 If you want to have more traditional  Thanksgiving dinner you should throw a dinner in 1950s style. Besides a really pretty women`s clothing and invidious interior design, the 1950s were a not so good decade for everyone. White men were only working in the family and the women were only housewives with no rights and degrading treatment.

The food was based on Jell-O and turkey, and if you asked your grandparents about this era, they probably will remember Marilyn Monroe dressed as a pilgrim. In the article below you can read and learn how to throw your Thanksgiving in 1950s style.

DRESS UP YOUR TURKEY

The turkey is the main dish of the Thanksgiving dinner like today, but in 50s turkeys were much smaller than today because they were from free-range grow and not stuffed with hormones and antibiotics like turkeys today. The ladies at home were in charge to prep and process the turkey.

Even the researchers at Duke University had the debate that is the best way for cooking the turkey is roasting, noway frying.

In the cookbook from the 1950s called Better Homes and Gardens Holiday Cookbook, was given a bit of easy advice how to make your turkey more festive. The advice was to decorate turkey with chrysanthemums.

LET THE WOMEN COOK, AND THE MEN CUT

The preparation of the  Thanksgiving is pretty sexist, the women are doing all the cooking work, and the men were in charge of cutting and carving the turkey. If the men did not know how to carve a turkey it was inexcusable. Today at least women fight their rights to carve a turkey.

CHEW WITH YOUR MOUTH CLOSED

In the production of Instructional Films Inc was made an instructional film about Thanksgiving manners for children. In the film, you will learn how to use a napkin and not slurp a soup. Today people are much more casual at the dinner table and the manners are not so strict.

SAVE ROOM FOR JELL-O

This is something that you will not see for sure on the table for Thanksgiving dinner today- Jell-O food. This is the result of the post World War II boom where public thought that is “better living through science”. The dinner table must have Jell-O based food recipes like Lime Jell-O Fluff Salad, and Jell-O with Shrimp Frosting with turkey and potatoes, seafood dishes, like oyster cocktails with mayonnaise.

Since 1924 The Macy’s Thanksgiving Day Parade has happened, and the first ballon in this event was Felix the Cat in 1927. Even today some of the balloons look creepy like monsters came out of the closet in the basement after almost 70 years.

The difference between modern and 1950s Macy’s Thanksgiving Day parade is that today the parade stops in every five minutes and some singers from The Voice sing some ballad.

Rootie Kazootie was a 1950s children’s TV show where you can see hand puppets and live actors singing songs and performing skits. This show was air from 1950 to 1954 and was very racistic and offensive even for that era.

The TV show was against Native Americans, and that kind of behave was normal in that decade before the Civil Rights movement, the American Indian Movement. In the whole story around Thanksgiving, Native Americans were introduced as the savages and white men were the rescuer.

Is the situation changed today? What do you think?

PUT A CORNUCOPIA ON THE TABLE

It meant in the 1950s for the housewife that they must have theme decoration for the holiday, and the decoration must include thematically decorated print tablecloth and plates, turkey-shaped place cards, and, a big-ass wicker cornucopia in the center of the table.

Some ladies even made a cornucopia-print skirt, especially for Thanksgiving dinner. The skirt was inspired by the ’50s skirts fashion, made to be worn with petticoats and industrial-strength girdle.

What do you think about the customs and manners for the Thanksgiving dinner in the 1950s? I am very glad that 50s era is over and will not come back.