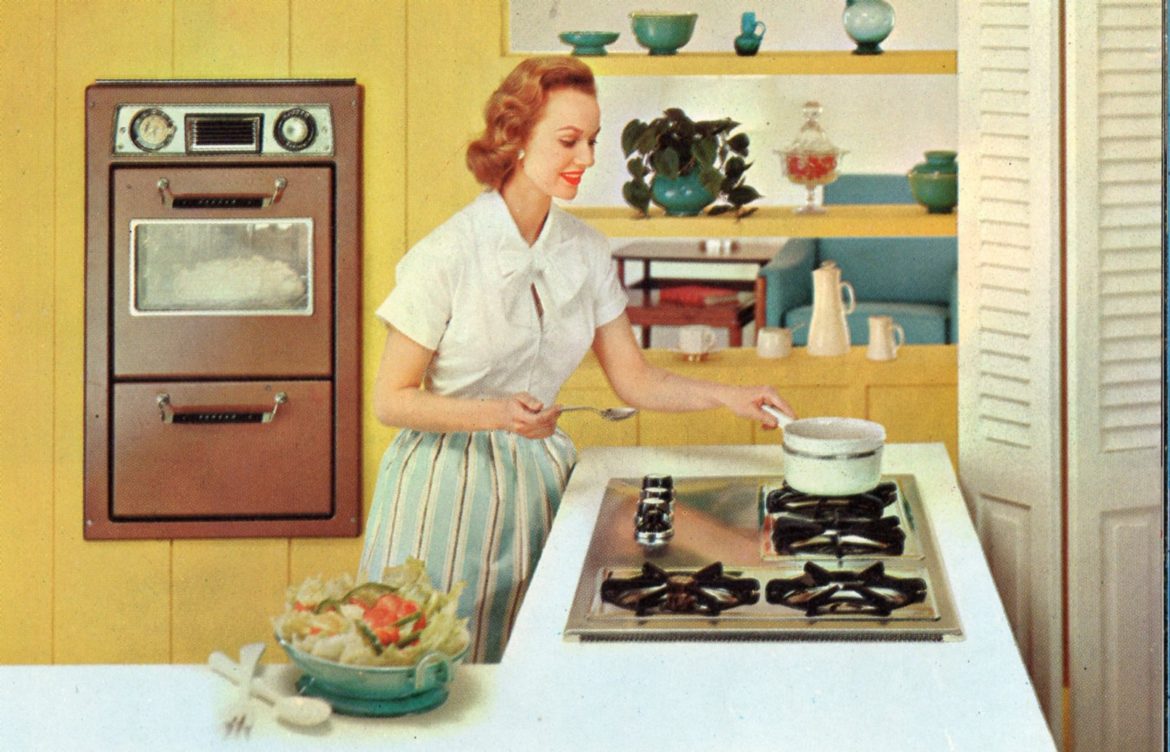 “They ate so well back then!  There were no fast food restaurants or packaged foods,” you insist.  But my dearies, that is just not true.  In fact, the 1950’s foods and menus boast some of the least healthy meal choices I have ever seen.  Anywhere.  And if you think about that timeframe it really makes sense.

Imagine yourself sitting in your very own Levittown home in 1953 ish (just to pick a year).  Life is bustling outside your window.  Everyone’s upbeat, as they should be post World War II.  The GI’s are home and life is returning back to normal.  Better than normal actually.  No more war rations.   No more fear.  There’s an all around feeling of celebration.  The war is over and life is better than ever.  So what changed?

Four things happened during that war that changed everything.   First, G.I. K-rations were invented as a way to prepare, package, and distribute food to the 16.1 million men who served during World War II.   Second, Birdseye frozen foods came onto the scene at a price affordable enough for neighborhood grocers to begin carrying them and the public to buy them.  (In 1944 Birdseye began leasing inexpensive freezers to them to make it possible.)  Third, soldiers from the Pacific and Europe brought home with them new tastes for foods such as chow mein, egg foo yung, enchiladas, and meats roasted with Polynesian sauces.  And lastly, televisions within the home became more common place.  In fact, The World Book Encyclopedia. Chicago: World Book Inc., 2003: 119 says, “”In 1945, there were probably fewer than 10,000 sets in the country. This figure soared to about 6 million in 1950, and to almost 60 million by 1960.”

The food industry was quick to jump on board with all of these developments.   Using the K-ration technology, they first invented a portable meal for use in airplanes.  Add in the advancements with affordability of freezers by the early 1950s and other frozen food advances, they then brought TV dinners right to our front doors. Imagine the delight to the housewife who had grown tired of spending 6 hours a day cooking 3 meals for her family!  Now she could just pop a tray in the oven for 25 minutes and be done! Check out this 1955 Swanson TV dinner commercial.   MMMMmm Mmmmmm…  just a little butter with that?  Well, isn’t that swell!

But it didn’t stop there.

Powdered eggs and instant potatoes came home from the war too.  Prepared and canned ethnic foods, canned meat, soups, chips, crackers, Minute Rice, candy, cake mixes, Ore-Ida frozen potatoes, Cheese-Whiz, sugar-frosted breakfast cereals, Eggo waffles, and hundreds of other convenience items began to fill every pantry.  And with the addition of so many canned soups, packaged cheese and crackers came the popularity of the casserole.  Most casseroles back then (and still now) included several cans of creamy soup as well as cheese and lots and lots of butter.  In fact almost everything in the 1950s was drenched in melted butter or other fat.   You’d never find any of those steamed frozen peas on the table without cream or butter on top!  And an extra dash of salt too.

And then there were the barbecues.   The newest trend.  Dad cooking out on the grill became all the rage as a way for him to spend time with the kids who had missed him so much during the war.   Every weekend all around the world there were cookouts filled with grilled meat, mayonnaise-layden salads, sugary desserts, and lots of sweet tea and lemonade.

Beginning to get the picture?  Oh but we aren’t finished.

McDonalds, Burger King, Pizza Hut, KFC, Legal Seafoods, Taco Bell, Jack-in-the-Box, Denny’s, and a slew of other fast food restaurants popped up all over the country.  Yes, fast food is not a new invention.  Fast food made its appearance in the 40’s and grew exponentially in the 50s and it never left.

The era of the 1950’s were, in my opinion, a major backslide in the world of healthy eating.  Add this to the booming growth of the chemical industries — both in industry and on our food products, in the 1940’s and 1950s and no one need be surprised that In the 20 years from 1975 to 1995, childhood cancer rates rose 20 percent.

We now know that what we eat can effect our chances of getting cancer or other diseases decades later.  In his book *Disease-Proof Your Child, Dr. Joel Fuhrman writes:

“The most recent scientific evidence is both overwhelming and shocking–what we feed (or don’t feed) our children as they grow from birth to early adulthood has a greater total contributory effect on the dietary contribution to cancers than dietary intake over the next fifty years.”

How scary is that?  What we feed our children today will determine their health not just two weeks from now (ask any parent of a toddler who is experiencing his 8th ear infection in one year!) but also what health they will experience 25 years from now.   Our immune systems are strong, but they can’t fight a diet that is completely bombarded by prepared, boxed, canned, and fast food.  So, by the 1970s, along came the massive increases in cancer rates in both adults and children.

The fact is that we have to get back to a diet for our families that consists of far more whole foods, fresh fruit, fresh vegetables, nuts, seeds, beans and whole grains.  Therefore, I will not promote a 1950’s menu plan.   I will occasionally share some wonderful 1950s recipes, but they will show “before” and “after” options for tweaking them to a more healthful Modern Day 50s Housewife standard.

Alrighty then…. moving on.  Watch for my next post on easy ways to plan, shop, and prepare nutritious foods for your family.